Despite appearances, proteas are not Australian native plants – but they could have been and there in lies a fascinating story stretching back billions of years, to a time when Australia was part of a super continent we call Gondwana. Also part of Gondwana was Africa and it's on this continent that proteas - and their close relatives leucadendrons and leucospermum - developed their huge diversity of shapes, forms and colours.

Australia split from the Gondwana land mass and over time produced another branch of the protea family. Australian members include waratah, banksia, grevillea, hakea and macadamia.

Across the ocean in what’s now South America are found other members of the protea family (also called Proteaceae). It’s hypothesised that all these different plants arose from a common protea-like ancestor.

Select a sunny garden position with well-draining soil. If the soil isn’t well-draining, create a raised bed for better drainage or grow a compact variety in a large container.

All do best in areas with winter rain and dry summers and are good coastal plants. Where summers are humid, select a sunny open spot that offers good air circulation. This helps avoid fungal problems, which can appear as leaf spotting or dieback.

Proteas and their relatives grow well with little added fertiliser, but can be fed in spring with a low phosphorus native plant food. They are water wise and low maintenance when established. Although they need little care, pruning spent flowers encourages a compact plant with lots of new growth and abundant flowers in the future.

Established plants need little watering unless times are dry, however new plantings should be watered regularly until they are established. Take care to water proteas adequately during their first summer in the garden. A good regime for established proteas is a weekly watering when there is no regular rainfall. Containerised plants should be checked daily and watered when dry. 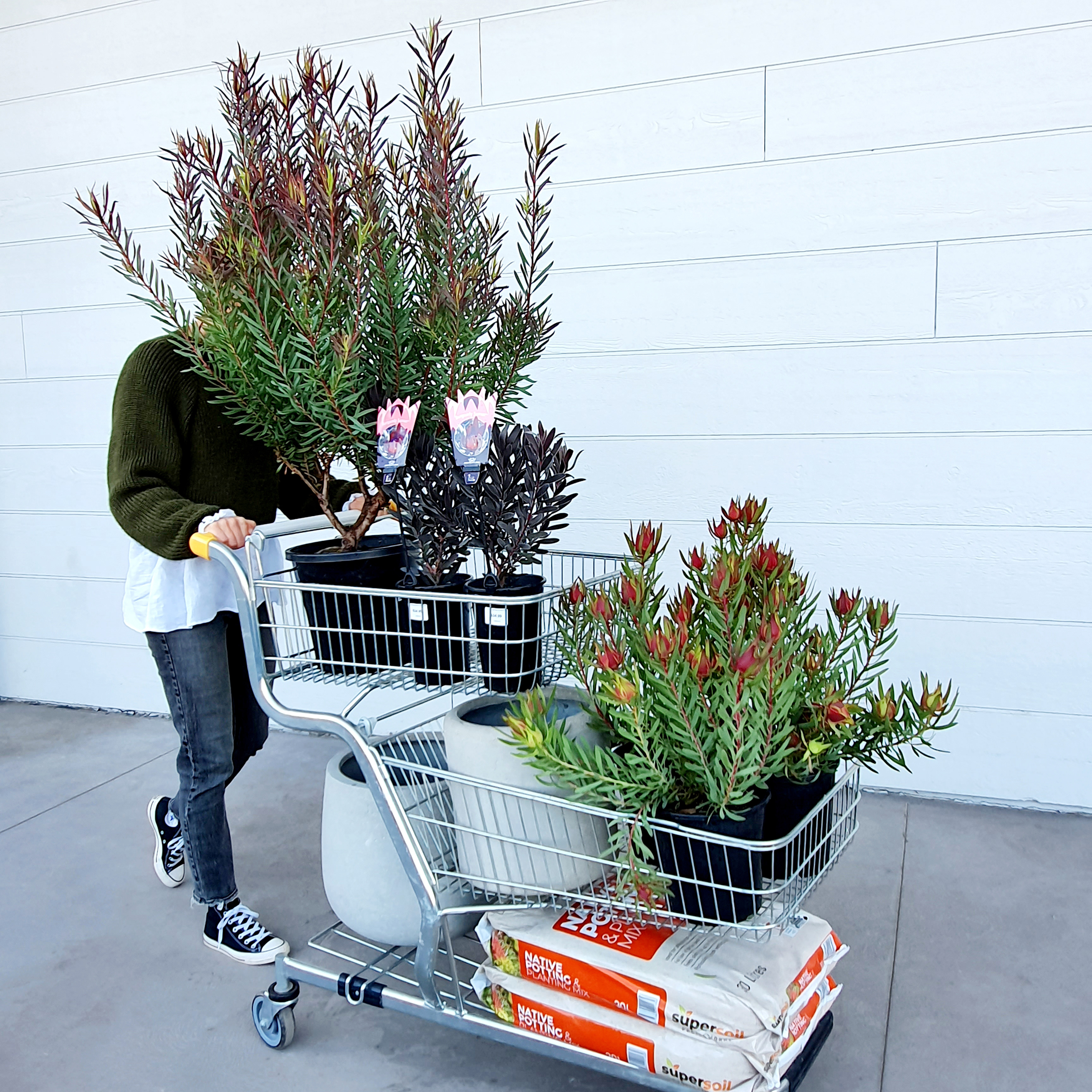 There are many protea species and varieties. Most proteas grown in our gardens are evergreen and frost tolerant. Most named varieties form small to medium-sized shrubs around 1.5 to 2 metres high. All can be kept compact with regular pruning.

While protea flowers offer lots of diversity, they share a similar structure of stiff, colourful outer bracts surrounding a central, banksia-like cluster of styles (style in botany refers to a part of the female reproductive organ of flowering plants). Most protea blooms have a conical shape.

Proteas flower from autumn to spring with many offering a peak of blooms in winter. Whether left on the bush or picked, protea flowers are long lasting and eye catching. They are also bird and insect attracting plants.

Grow proteas and their relatives as feature plants or as part of a mixed shrubbery. In the garden they team well with closely related Australian natives such as banksias, or with other South African plants such as agapanthus, red hot pokers and osteospermum daisies.

While not producing such the blooms of the proteas, leucadendrons and leucospermum enliven winter gardens. These evergreen shrubs are good planting companions for proteas and Australian native plants.

Leucadendrons have stiff green to grey-green leaves, many with brightly-coloured new growth surrounding small, neat flowers. It is the long-lasting coloured foliage that adds to their garden value.

Leucadendrons can be grown as a hedge or screening plant or as a feature shrub. For a low-maintenance planting, select several different named varieties to give a display of colourful foliage contrasts.

Leucospermums are grown for their round and colourful pincushion-shaped flowers made up of a cushion of coloured styles, much like a grevillea or hakea flower. Flower colours range from bright red, yellow and orange to more pastel apricot or golden tones.