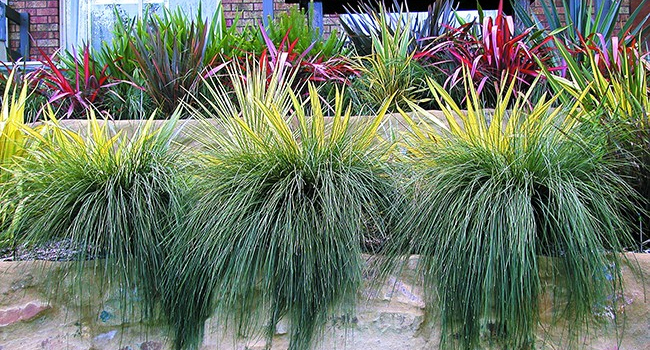 At the recent Melbourne International Flower and Garden Show, where garden designers from around Australia present inspiring display gardens to the public, it was a garden of native plants that was stopping visitors in their tracks.

The garden was the work of landscape designer Phillip Johnson to mark the Gallipoli Centenary. He presented a slice of the Australian bush complete with a creek and paths, which led to a field of remembrance – a green grassy space speared with knitted and crocheted red poppies.

The show garden design was inspired by the contents of a letter written in World War One from the trenches. In 1915 Phillip’s great grandfather wrote in a letter home about dreaming of walking along the banks of Reedy Creek in Melbourne and enjoying the sights, sounds and scents of the Australian bush only to wake and find himself in the horror of the war. Through his design Phillip captured the beauty of the Australian bush in a garden situation but also provided an insight into the thoughts of Australian Diggers.

This idea of a garden inspired by a bushland experience is one of the new ways native plants are used in modern Australian gardens.

In days gone by one of the driving reasons for growing Australian natives was to have a low-maintenance, easy-care garden. Often these gardens failed to meet expectations. When native plants are grown in a garden setting, they require maintenance such as pruning and watering. Left unmaintained they became overgrown and unattractive.

Today the reasons for growing an all-Australian native garden can be many and varied. Like Phillip Johnson, gardeners may want to create a bush experience or they may be wanting to have a sustainable garden, be waterwise, attract birds and insects, grow local or endangered species, or to have a garden that’s in tune with its surroundings. Given the vastness of Australia, there are also native plants to suit a huge range of soil and climatic conditions.

In the past decade native plants that are more suited to our 21st century garden environments have been developed. These new generation native plants may be more compact than the original native species, have longer flowering, larger flowers or more interesting foliage. Many are also more tolerant of a wider range of soil conditions and are disease resistant.

Naturally compact or small-growing native plants fulfill many niches in modern gardens and are beginning to be more low maintenance than ever before. They can be used as hedges or screens, grown in containers or massed into easy-care beds.

Some of these new-generation natives include named varieties of lilly pillies (Acmena and Syzygium species), correa, westringia, lomandra and dianella among many others.

As well as having access to more reliable native plants, gardeners also have a wealth of materials to help them to grow such as fertilisers and potting mixes designed with the special needs of native plants in mind.

Melbourne International Flower and Garden Show is an annual event held in autumn in Melbourne. For more information see www.melbflowershow.com.au.