How to identify good bugs in my garden: 7 beneficial insects that help plants

How to identify good bugs in my garden: 7 beneficial insects that help plants

Before you squash that insect – are you sure it’s a pest? Many insects are beneficial to have in the garden and repay their accommodation by eating the real pests, or otherwise being food for birds and other animals. If you are unfamiliar with an insect, watch it for a few minutes and it may reveal whether it is a pest that’s eating a plant or a friend that’s eating other insects or simply pollinating your plants. Remember, too, that insects go through several stages in their life cycles, so it is important to become familiar with good bugs as eggs and babies (larvae) as well as adults (often winged and highly mobile).

Here are some good bugs you may find in your garden. While the adults are often easy to see, you may need a hand lens (such as a magnifying glass) to see all the life stages of these beneficial insects. 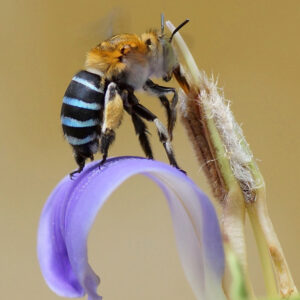 Bees are probably the most recognisable of all garden insects as they buzz about foraging in flowers harvesting pollen and nectar. Honeybees are excellent pollinators and are vital to have if you want to produce fruit. As well European honeybees, there are also a host of native bees ranging from tiny to big insects such as the blue-banded bee and the teddy bear bee. Some native bees can be kept in small garden hives. Bees can be distinguished from wasps and flies as most carry pollen on their legs and can be observed flying from flower to flower. 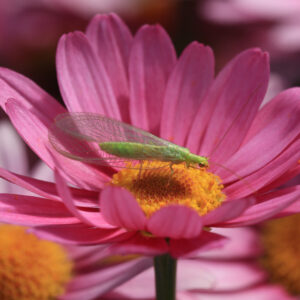 Green lacewings are frequent insect visitors and an absolute whiz at pest control. These good bugs will be seen in the garden as small, green insects with lacy wings befitting their name. This is the adult stage. Adults feed on nectar and lay eggs on the underside of leaves. The eggs are held on long strands. Leave them to hatch, as the larvae do most of the pest control, feeding on aphids, mealy bugs, thrips, whitefly and more. At just 2-8mm in length, these baby lacewings are hard to see, but if spotted they’ll have grey segmented bodies, six legs, small pincers and often carry the remains of their egg sac on their backs. Lacewings are used commercially to control insects in nurseries and horticultural crops.

Ladybirds are beloved in the garden for more than one reason!

Ladybirds are insects we all love to see in the garden, but they are even more welcome when you realise how many other pest insects they can consume. Ladybirds and their larvae control aphids. Some native species also control mealy bugs and hard scale. One particular ladybird variety also controls the plant disease powdery mildew. Before spraying, squashing or hosing aphids from a plant, take a careful look to see if there are any ladybirds present. While the adults are highly recognisable with their black-spotted wings of red, orange or yellow, the larvae are less familiar. They are small and usually black with segmented bodies and hairs. If these good bugs are present in your garden, let them have a go at pest control for you. 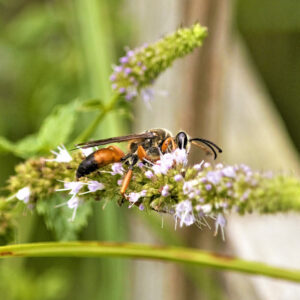 Paper wasps can be dangerous, but they also do plenty of good in the garden.

Wasps abound in the garden, and most play an important role in pest control dealing with all sorts of pests including caterpillars, spiders and even house and stable flies. Wasps often gather insects to feed their young, while others parasitise pests and lay eggs into the unsuspecting insect. Many wasps are small and rarely noticed. One you may find evidence of in the garden is the mud wasp, which builds clusters of mud cocoons on walls. These large wasps are not dangerous and are carrying out insect control. If you can tolerate the mud colonies, your garden will benefit. Paper wasps, which build carefully crafted tiered nests hung in trees or shrubs or attached to beams or under eaves, are less benign if disturbed however they too are carrying out pest control in the garden. Highly dangerous and already common across southern Australia are the European wasp, which resembles a large honeybee but is an introduced pest. This wasp feeds on nectar but also insects and is attracted to sweet drinks and meat, making it an unwelcome guest at picnics and barbecue. European wasps also feed in fallen or damaged fruit. 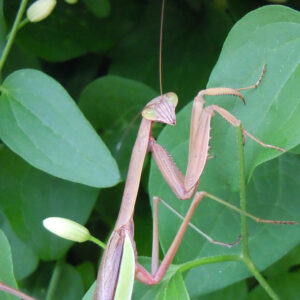 The praying mantis is a gentle garden tenant.

Praying mantis look very scary, but are in fact benign and highly beneficial in gardens as they control a wide range of insects including caterpillars, beetles, aphids and mosquitoes. The name comes from their typical pose, which is to sit on a plant with their forelegs raised as though in prayer. Although some grow up to 12cm long, these solitary insects are often hard to see as they are camouflaged by their green or brown colouring. Watch out for the insect but also their egg cases, which resemble small woven baskets or other shapes in among twiggy growth. 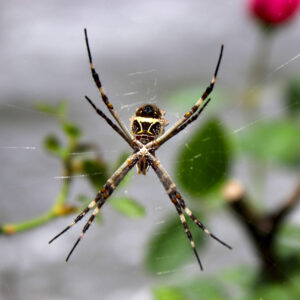 Spiders are not beloved by many, however these eight-legged creatures (technically arachnids and not true insects) are exceptional at pest control. Most are entirely harmless to us. Spiders including huntsmen and daddy long legs, which may be found in houses, can feed on flies, cockroaches and mosquitoes among other pests. Spiders may also live in flowers, on plants or in soil. Other beneficial spiders such as orb weavers build complicated webs at night that may be seen in the morning covered with dew. These webs catch many night-flying insects and are often prevalent in gardens in autumn. Dangerous spiders to watch out for are funnel webs (black hairy spiders) and red back spiders (black with a distinctive red mark). The Sydney funnel web may be found in webbed holes under rocks or soil along eastern Australia. Male Sydney funnel webs may find their way into discarded clothing or shoes left outside. They are often active in autumn, but always shake shoes or clothing left outdoors before wearing. Preferably, store shoes and garments on a shelf or indoors. Gardeners should also be watchful for red back spiders, which hide in webs under sheets of metal and other material, in rubbish or even under pot rims. Red backs may also find homes in odd places such as handles of toys such as tricycles. Wear garden gloves and check hiding spots when gardening to avoid unwanted spider encounters.

Predatory mites occur in gardens and are used as a commercial biological control. There are many mites, but the best known is persimilis (Phytoseiulus persimilis) which is very good at controlling two-spotted mite, a pest that feeds on the underside of leaves on many shrubs (such as azaleas, rhododendrons and beans). Persimilis are small, reddish insects with eight legs (at some life stages, though, they have just six legs). They are slightly larger than their prey, and pierce the bodies of two-spotted mites, which are clear insects with a pair of distinctive black spots on their bodies. Leaves attacked by two-spotted mites are often silvery and have webbing under the leaves. As these insects are tiny, they are best seen through a hand lens underneath a leaf.

For more information about a host of beneficial insects to discover in your garden, see Garden Pests, Diseases and Good Bugs by Denis Crawford (HarperCollins, 2015). If the bugs in your garden don't fall into the above list and you think they might be foe rather than friend, click here to help identify some common garden pests and diseases.

Indoor plant tips for beginners: How not to kill your indoor plants
Monstera Deliciosa 101: How To Care For Your Monstera