How to treat citrus bugs and nutrient deficiencies

How to treat citrus bugs and nutrient deficiencies

There are lots of pests that are after your citrus trees, especially in the warmer months of the year. Here’s what to look for and what to do if you find one or more of these common pests. In addition to pest problems, citrus can also suffer from nutrient deficiencies that appear as yellowing leaves, so there are some tips for recognising and dealing with those too. 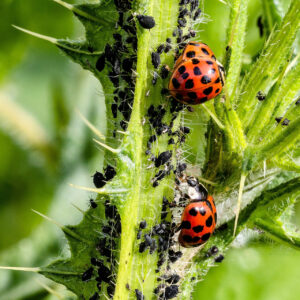 Ladybeetles feeding on an infestation of black aphids.

These tiny insects cluster on new growth, especially in spring. Citrus aphids are usually black or green. Squash gently (don’t damage growth), hose them off ensuring you comply with any water restrictions in your area, or apply an organic pesticide registered against aphids, such as Yates Citrus Spray. Before treating, check that the aphids are not already being brought under control by ladybirds and their larvae that feed on aphids. 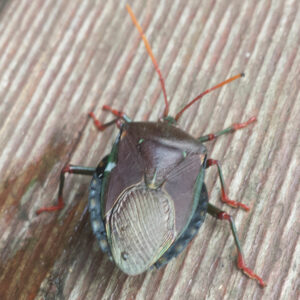 A bronze orange bug, also known as a stinkbug.

Adult bronze-coloured stinkbugs and also smaller green stinkbugs are found on citrus trees in late spring and summer. They feed on developing fruit, leaving it dry inside when it matures. The problem actually starts in winter, when these insects are in a juvenile stage. At this time they're vulnerable to horticultural oils like Pest Oil and Eco Oil, which can smother and kill them. In early spring, treat with Yates Nature's Way Citrus & Ornamental Spray. During late spring and summer, destroy adult bugs. On hot days these pests will congregate on shaded trunks of citrus trees. They can be squashed ‘en masse’ using something flexible such as an old thong, or picked off the tree and destroyed by dropping them into a bucket of soapy water. Note: Always wear eye protection when dealing with stinkbugs, as adults emit a caustic spray when disturbed which can cause serious eye damage. Also note that adults can fly from tree to tree.

New leaf growth becomes distorted, twisted and marked with silver lines as the larvae of this pest burrow under the surface of the leaf. Spray with horticultural oil as new growth appears to stop the adult insect laying eggs on the leaves and starting the life cycle. If signs are visible, treat with Success Ultra. To remove damage, simply prune away tip growth and place it in a bag in the rubbish bin. Although it looks unsightly, this is one problem that shouldn’t affect the overall tree health. A fruit fly ready to cause untold damage.

Thin-skinned lemons and mandarins may be attacked by fruit fly (usually Queensland fruit fly in eastern Australia). The adults are large but elusive flies that are difficult to spot. Rather than looking for flies, concentrate on looking for larvae or maggots in fruit or rot. These small, creamy-white, writhing larvae hatch and feed in soft fruit. Telltale signs of their presence include stings on the fruit skin, signs of brown rot and fruit drop. Maggots flip and wriggle themselves out of the fruit and into the ground under the fruit tree where they pupate and emerge as adults. The entire life cycle from egg to newly-minted adult can take just four weeks, which is why the pest spreads so rapidly. To prevent attack use organic baits and attractants near the crop to lure fruit fly away from the fruit. Some options include Eco-Lure Fruit Fly Traps and eco-naturalure. Reapply regularly. 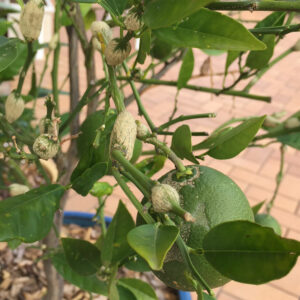 Swellings and lumps on branches are signs of gall wasp attack. The wasp lays eggs under the bark and the branch develops an ugly lump in response. Gall wasp damage isn’t as damaging as it once was, as a predatory insect that acts as a biological control agent is controlling it. However, damage can occur. To control gall wasp, cut off the affected branches before the larvae hatch (usually in late winter) and dispose of the cut piece in a bag in the rubbish bin. Holes (the size of a small pin prick) in the gall indicate that the wasp has hatched and gone, so pruning at this stage won’t control the pest. 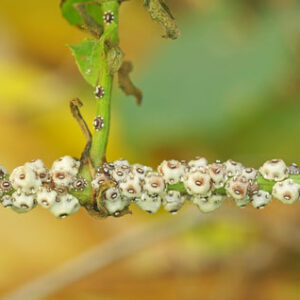 Several scale insects attack citrus trees. They can be spotted clinging along stems, on the back or front of leaves or encrusted on the skin of fruit. The scale is a small, soft-bodied insect that is protected by a waxy cover. This makes it hard to treat. Scale can be an indication of stress so provide extra water and fertiliser and apply horticultural spray oil to affected areas. Scale on fruit can be wiped away before the fruit is eaten.

Citrus trees need lots of nutrients, especially from spring to early autumn when they are in active growth. When they are lacking general nutrients such as nitrogen, they are likely to develop yellow leaves, which is especially obvious in new growth. This is fixed with a twice-yearly feed of complete citrus food (feed in August and February). Yellowing leaves in winter are often related to cold soil conditions that inhibit the uptake of nutrients.

Sometimes, however, citrus lack trace elements. These nutrients, which include iron, zinc, manganese and magnesium, are needed in small quantities to help the tree grow, flower and produce fruit. Distinct patterns of yellowing can indicate a lack of one or more trace elements. Common patterns of nutrient deficiency are yellow with a green midrib (main leaf vein) indicating iron deficiency; yellow mottling of new growth and smaller than usual leaves, which may indicate zinc deficiency; mottled yellow leaves with green veins, which may indicate manganese deficiency; and yellow blotching with a distinct green arrow shape around the midrib at the base of the leaf, which indicates magnesium deficiency. Generally, you should apply iron chelates to correct an iron deficiency, and trace elements for other deficiencies.

Always ensure that you water your plants thoroughly both before and after applying fertiliser. If problems continue, do a pH test as the soil may be too alkaline, or too acidic for good take-up of nutrients.