A little bit about Pandorea

Pandorea is an evergreen native climber with tubular or funnel-shaped flowers. Foliage is either dark green and glossy or bright green and growth is vigorous.

Flowering will occur mainly through spring and summer but will spot flower throughout the year. Jasminoides var can produce medium or small white or pink flowers in clusters. Pandorana var flowers range from cream-white to bright-white to maroon-throated, burgundy or even yellow-orange, often with a delicate fragrance.

The ideal position for Pandorea

Pandorea is a tough climber and it's lush, bright green foliage will provide a great year-round cover for a fence, pergola, wall, or can be planted to cascade over a retaining wall or bank.

Position Pandorea in full sun to part shade in a moist, well-draining clay loam or sandy soil. It's best grown in the ground with a good mulching to keep roots cool however you can also plant them in an extra large pot. They will also thrive in coastal areas as long as they are not on the front line.

They have a medium tolerance of frost so will need protection in cooler areas during winter.

Pandorea will happily live amongst other climbers like Bougainvillea and deciduous climbers, so try some combinations to create an impressive, colourful display. 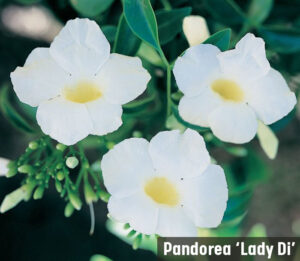 Water regularly during the warmer months of the year to keep the soil moist, but not soggy. Use mulch to keep moist, reduce weed growth and protect the root system. Pandorea won't need watering during winter.

Fertilise in early spring and summer to assist flowering with a good native food that is low in phosphorus.

Maintain Pandorea with a good pruning after flowering. If vigorous growth needs to be kept under control, trim or cut back as needed.

Pests and diseases to watch out for

Aphids and caterpillars can damage foliage so watch out for these critters and remove as spotted.

Root Knot Nematodes can be a problem and will result in poor growth. Most Nematodes in the garden are beneficial however there are some that feed off the roots limiting the plants ability to take up water and nutrients. These can usually be avoided by healthy Pandorea so ensure that you plant in the correct position and give plants the care they need. Some gardeners have also planted Marigolds which release a substance into the soil believed to deter Nematodes.