A Port Wine Magnolia in bud.

When in bloom, the port wine magnolia adds a sweet scent to the air. It has small, insignificant creamy-purple flowers throughout the year, so catching a waft of scent is often the first sign that the shrub is back in bloom.

The perfume of this flower is often described as having the scent of Juicy Fruit chewing gum – a modern take on the idea that it smelled like port wine. It is also described as having a banana-like scent. For me, it’s all Juicy Fruit but however you describe its fragrance, this shrubby, evergreen magnolia is a useful addition to the garden as it adds perfume and provides a light green leafy backdrop year round. Plants grow to around 2-3m high and wide, and can be used as a tall, dense hedge or privacy screen. When planting for a dense hedge, space plants around 1-1.5m apart (closer spacing gives a denser hedge).

They grow in full sun or in a position with light shade. These plants also have a wide climate tolerance, and can be grown in subtropical, temperate or cool climates.

Until recently, port wine magnolia was considered to be a magnolia relative rather than a true magnolia. It was known as Michelia figo but now, along with other michelias, it’s a magnolia and classified as Magnolia figo.

Alongside a botanical name change, port wine magnolia has had a makeover in recent years with the introduction of hybrids with larger, showier flowers. The flowers have a centre of golden stamens and a mass of petals that can be 5cm long. These new magnolias are sold as fairy magnolias and flower heavily in spring with spot flowering through out the year. 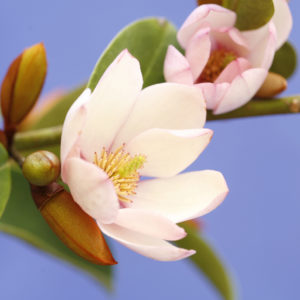 Fairy magnolias are a complicated hybrid between the port wine magnolia and two other magnolias, M. doltsopa and M. yunnanensis. There are pink (‘Blush’) or white (‘White’ and ‘Cream’) colour forms, which can be grown as a container plant, or massed into flowering hedge. Fairy magnolias can also be trained as an espalier against a warm wall.

Care in the garden

Port wine magnolias need little care and have no specific pest or disease problems, which makes these low-care, low-maintenance plants. They benefit from an application of complete fertiliser in spring as new growth resumes. Once established these shrubs are drought tolerant, however plants are denser and flower longer with additional watering during hot or dry periods. Clip plants to maintain their desired size and shape.

A palm for every home
Container gardening: our top picks