How to repot plants

How to repot plants

To keep potted plants healthy and thriving, they need to be repotted regularly. This means taking them out of their container and either putting them into a new, larger container or replanting them into the same container with fresh potting mix. Repotting is done to provide extra growing space and nutrients.

How often to repot

The frequency of repotting varies with the growth rate of the plant and size of the pot. Small fast-growing plants may need to be repotted every few months, while larger plants growing in a roomy pot may only need to be repotted every two or three years. Mature healthy plants that are making little new root or shoot growth and are growing in good quality potting mix may need repotting at less frequent intervals.

Repotting can be done at any time and should be done urgently if the plant is struggling to survive because it has outgrown its container. If there’s no urgency, autumn and spring are good times to repot most plants. Always place repotted plants into a sheltered spot (protected from cold or heat) until the plant has settled into its new potting mix.

Signs you need to repot

Indications that a plant needs repotting include: frequent drying out and wilting (due to depleted potting mix); difficulty to water (water may just run down the side of the pot without soaking into the root ball); the potted plant blowing over (as it is too big for the pot and unstable); the pot cracking or roots protruding from drainage holes; pests and diseases (due to water and nutrient stress); poor growth or yellowing foliage due to lack of nutrients; and slumping – that is the level of the potting mix has dropped within the pot.

Potted plants should also be repotted into fresh potting mix when there are concerns that the pot contains pests (such as curl grub or ants). 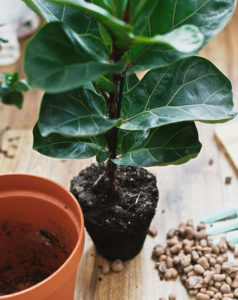 As well as selecting a good quality potting mix, also choose a mix that has been formulated for the type of plant you are growing. Specialised mixes exist for a range of plant types including: indoor plants; plants growing in terracotta or hanging baskets; native plants; roses; gardenias, azaleas and camellias; cactus and succulents; bonsai; and orchids. These specialised mixes may vary in particle size, nutrients, pH and water-holding capacity.

Difficult to move and rootbound plants

When repotting, gently remove the plant from its old container. If the pot is narrower at the top than the base, it may be necessary to cut or break the pot to release the plant. Tapping the sides of the container and turning it on its side can help to release the root ball and make it easier to remove the plant from the old pot. Never tug on the stem to try to get a plant out of a pot, as this can make the stem break away from the root ball.

Check that drainage holes are clear before starting to remove a plant from its pot, as the roots may have grown through the drainage holes and even into the ground. To release these roots it may be necessary to break the pot. Dig up as much of the root ball as possible to repot.

Examine the root ball. It there is little potting mix left and the roots are congested, matted or circling so that they retain the shape of the container, the plant is root bound and overdue for repotting. In this situation it is necessary to gently prune the matted or circling roots. Also trim any roots that were broken or damaged when the plant was removed from its pot. If a plant is being returned to the same pot, but with fresh potting mix, it will probably be necessary to trim the roots prior to repotting. Remove any weeds or pests. A root bound root ball will benefit from being soaked in a bucket of water with a seaweed tonic before it is repotted.

If it is very hard to repot a plant, removing some of the potting mix and replacing it with fresh mix from time to time, along with adding well-rotted manure or compost to the top of the pot, can help prolong the time before repotting becomes vital.

Ideally select a new pot that’s slightly bigger than the old pot with plenty of space for the root ball. Ensure the new pot has plenty of drainage holes in its base. To prevent potting mix leaking through the drainage holes, cover them with a piece of mesh laid across the hole inside the pot. It is not necessary to place crocks (broken pots) or pebbles in the base of pots.

If the pot is very large and heavy, put it into position before starting to fill the pot with potting mix.

The perfect house plant: How to care for your Peace Lily
Shade plants for small gardens