Grevilleas are among the most versatile plants you can grow. Use them as a hedge plant, feature shrub or tree, as a ground cover or a weeping standard. Put them in a garden bed or in a container. There are varieties for all soils and climates and they bring in the birds. Grevilleas are also charming as cut flowers.

If you think you know grevilleas, think again. You may have the red-flowered grevillea ‘Robyn Gordon’ (pictured above) in the garden. After all, it is one of Australia’s most popular and widely grown shrubs, but there’s so much more.

Local plant breeders have been hard at work creating new hybrids and selecting varieties with good cold tolerance and that perform well as garden plants.

Grevilleas offer lots of potential, as there are some 350 different species, which grow in every part of Australia. The tallest is the silky oak (G. robusta), which is a tree that produces large golden flowers in spring, but many are low, groundcover forms. ‘Poorinda Royal Mantle’ is one of the best known of all groundcovers.

There’s no need to have a purely native garden in order to grow a grevillea or two. These iconic native plants mix in with other plants including succulents, Mediterranean plants and also suit a cottage-style garden. 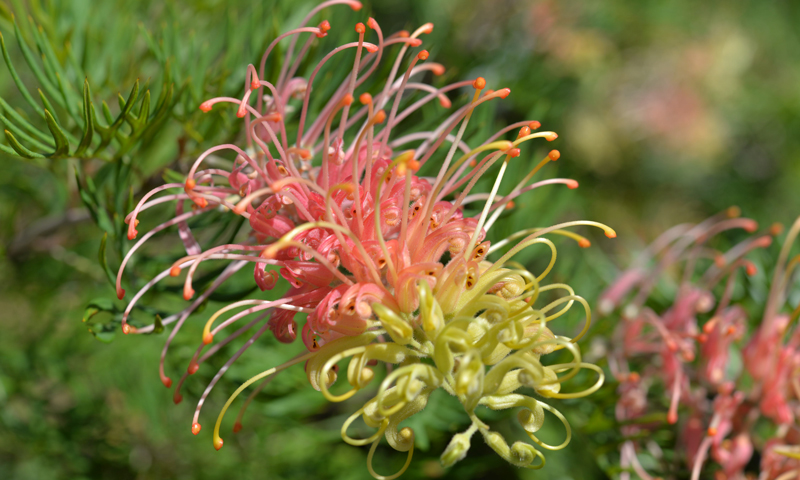 Grevilleas are part of the large protea family (Proteaceae), so are related to banksias, waratahs and proteas. They are broadly divided into two groups: ‘spider’ flowers and ‘toothbrush’ flowers. The wispy filaments that characterise grevillea flowers are styles (the female part of the flower), which are surrounded by anthers (the male flower parts). Grevilleas don’t have true petals.

Colours for both flower types range from white or cream through to tones of grey, mauve, pink, red, lime, yellow, apricot and orange. Some combine two colours. There are varieties that flower throughout the year and others that have their main flowering in one season (such as late winter and spring) but produce the occasional flower at other times.

Grevillea lanigera is a spider-flowered grevillea native to eastern Australia. It grows as a dense, small-leafed shrub that makes an excellent groundcover spreading 1-2m. It has red and cream spider flowers in winter and spring and soft grey-green foliage. Named cultivars include ‘Little Drummer Boy’ and ‘Mt Tamboritha’.

One of the myths about growing native plants such as grevilleas is that they don’t need any care. While many are easy to grow, grevilleas benefit from a light prune after flowering and a dose of a low-phosphorus native plant fertiliser in spring. They are mostly drought hardy once established and perform best in well-drained soil.

Older leggy varieties can be pruned back to encourage new growth and better flowering but take care. Occasionally hard pruning can inadvertently kill a grevillea. If this happens, don’t despair, remove the old plant and select a new, vigorous grevillea to quickly fill the space.