Wisteria is a beautiful spring-flowering climber that thrives in cool, temperate and subtropical gardens. One of the best wisteria gardens I have ever seen was also an example of why you need to keep wisteria under control. In this garden wisteria had taken over the backyard, twining its way through trees and shrubs. It was home to a family of boys who treated their wisteria jungle as an adventure playground. They had created bike tracks under the wisteria and spent the day outside playing. It was wild.

Most gardeners aren’t prepared to give their entire garden over to wisteria and the good news is this vigorous plant can be managed with good planning and well-timed pruning.

Wisteria is a deciduous climber that flowers on bare stems before it fully regains its foliage. It will scramble into trees, through shrubs and across the roof and can spread 10 metres high and as wide.

Plan for its control before planting. The best way to do this is to provide a strong support structure such as a pergola. This is also a good way to display the flowers as they hang down from the vine. Wisteria can also be trained along wires across a wall.

Make sure the support structure is made of treated timber or metal. If wires are used, make sure they are strong and firmly attached. To keep the wisteria controlled make sure there is access from all sides so that it is a simple matter to prune and train it.

Another way to keep wisteria under control is to grow it as a graceful standard with a stem and a head of flowers and foliage. This can be a good option for growing wisteria in a small space as standards can be grown in large containers.

Wisteria needs full sun to grow and flower well. In shaded conditions it grows but may not flower. They are rarely attacked by pests or diseases and need little extra fertiliser. Wisterias are legumes (like peas) and so can enrich the soil with nitrogen.

To keep the plant under control, prune after flowering and prune again in summer. Prune by removing wayward stems and shortening the main stems (making sure to leave several buds).

Don’t prune wisteria in winter as winter pruning removes flowering wood. As the plant matures, the need for pruning is reduced as its growth slows.

As well as pruning, train stems along the pergola or wires as it grows. Regularly inspect the plant to make sure it hasn’t invaded nearby plants or buildings. Ruthlessly remove unwanted stems.

Wisteria produces long hanging seedpods. These can be removed by pruning after flowering or the pods can be left as an autumn and winter feature of the plant. They drop during winter or can be cut off.

Wisteria is a long-lived plant. Old plants have thick grey stems. Very old plants may be attacked by borers (insect larvae that burrow into the stem) and old, woody stems can rot. These stems die and should be removed at the base of the plant. This usually reinvigorates the plant so it produces new, vigorous growth. 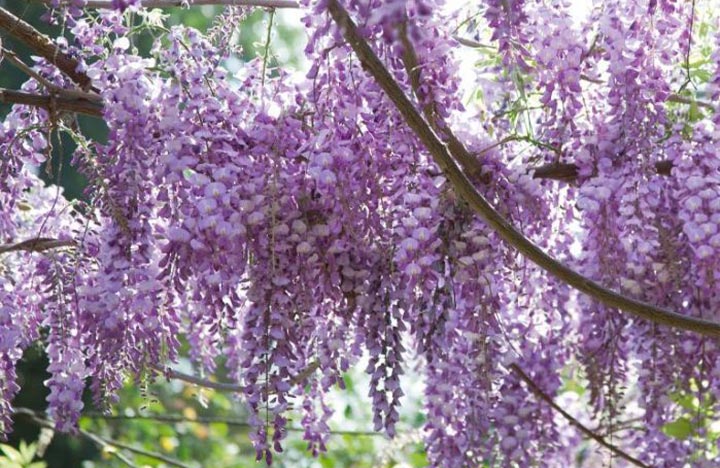 It’s the perennial question and one that gets asked by gardeners every September when they see other wisterias in full bloom. There are many reasons wisterias don’t flower, starting with mistimed winter pruning or possums eating the buds in early spring.

Lack of sun, too much nourishment (favouring leafy growth over flowers), drought and plant immaturity can also be responsible. While it may take some plants several years to mature and flower, there are some rare plants that don’t flower due to the original cutting material. But most plants will flower with sun and good watering, especially during late winter as buds are forming, and spring and summer as new growth is forming. Some wisterias also produce flowers after the main show during summer.

Chinese wisteria (Wisteria sinensis) is the wisteria seen most frequently in gardens and is the easiest to grow. It has hanging clusters of wisteria blue (mauve blue) flowers usually 15 to 30 centimetres long with a heady vanilla scent. The clusters are known as racemes and are filled with humming bees when in bloom.

There are also species with longer flower tresses than Chinese wisteria as well as varieties with double flowers and even white, pink or deep mauve flowers.

Japanese wisteria (Wisteria floribunda) is one of the most spectacular of all wisterias and grows around eight metres high and wide. Its flower racemes can hang down 40 to 100cm and look spectacular on a pergola where they can be viewed from below. The variety ‘Violacea Plena’ has lavender double flowers, ‘Kuchi-beni’ has pink flowers and ‘Alba’ has white flowers.